Born in a blacked-out Vancouver two days after the bombing of Pearl Harbour, he was the first child of Bill and Edna Pratt.   My grandparents had moved to the coast for different opportunities and a new life away from the extreme conditions of the Alberta and Saskatchewan prairie where they’d been raised.
The lustre of the big city didn’t take long to dim and they soon moved back to Esther, Alberta to complete their family with Marjorie, Wilf, Anne, Dale, Shelley and Gayle.

I have so many stories to share of my dad, and so many things I have learned.   We have not always had the easiest relationship – my stubbornness rivals his, and as he’s always encouraged us to learn and read as much as we can, debates and arguments could be well-informed and quite heated as neither of us would back down from our positions.

In spite of himself, he raised me to be a feminist – I constantly challenged the gender stereotypes from his generation and clamoured to learn how to drive tractor, shoot gophers and be taught the same things as my older brother.   When he wouldn’t teach me within the timeline I demanded, I learned on my own.   As I got older, there were certain things he insisted I master – knowing my vehicle’s motor as a prime example (oil and tire changes, even taking out an axle once) – so I would not be disadvantaged in the marketplace nor rely on others to look after me.

My dad has always been one of my strongest cheerleaders and has told me I could “take on the world with a bucket of water and win”.

I’ve heard from his siblings what a great brother he has been, offering counsel and advice  and as a fantastic uncle to their children.

I wish I could be there to help celebrate your birthday today.  You’ve been a great dad and an amazing grandfather. 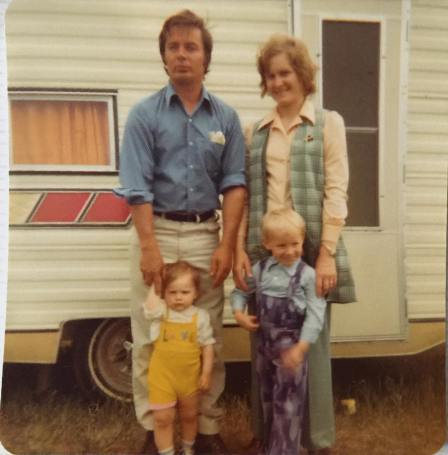